On Saturday, I went to visit Shugborough Estate in Staffordshire, this is a park run by the National Trust which covers a 900 acre area. Besides the large amounts of grounds, the estate also house a Mansion, shops and tea room (some independently running) and a Georgian farm & mill.

Myself and Jess went together with a couple of our friends (Dan and soon to be Becky Turner) - I myself had never been, but Jess and our friends used to visit the estate when they were younger with CYC for firework nights, although there had been at least a decade since they had last been, the area hadn't changed much, albeit feeling "smaller" than last time.

Upon arriving we were acutely aware that there was a cycling race later on that day, which hindered our trip - it meant that we would have to leave by 5pm, or risk being stranded at the estate until 10pm, as they were closing the road for the race. As much as it would be nice to be there for the cycling, we opted not to hang about.

Considering how hot it had been the weekend before for my Brother's wedding, today was pretty grim. It was the first weekend in months that Me and Jess had felt we needed to wear jeans, rather than shorts, and even though I took my sunglasses, I was clearly being optimistic, as the rain started to pelt down as we arrived. We met up with the couple in the overflow car park (considering it had been raining, it was pretty busy, this was still 5 hours before the race).

We then caught the land train to the main entrance, and paid for parking and the tickets. Because of how busy it was we were given a sticker each to put on our clothes, which would save us taking out the ticket in each area we went to (it also meant it wouldn't get too wet!), we then went and visited the walled gardens which also had a giant bowling set, so being adults, we stayed for a while: 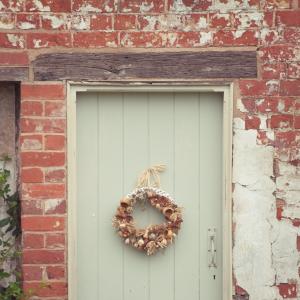 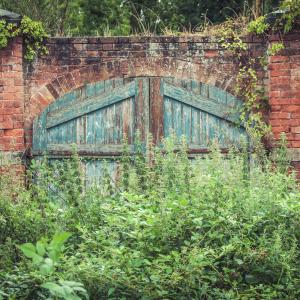 Just as we were leaving the gardens the rain started to subside, and we then carried on around the estate looking in the various exhibitions that were on display, as well as a couple of shops, one of which created wooden objects such as key-rings, bowls and placemats. When we stepped in a boy had asked for a Christmas tree to be made for him, so we were able to watch him make it, as you can see below: 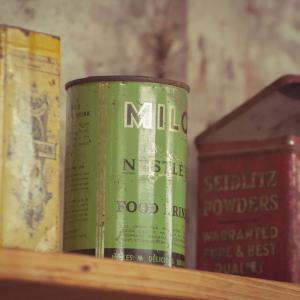 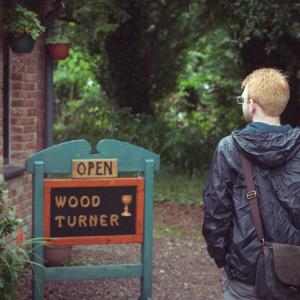 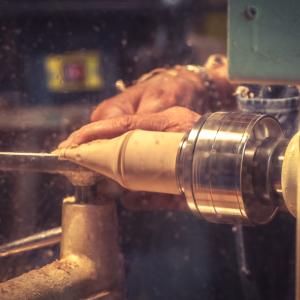 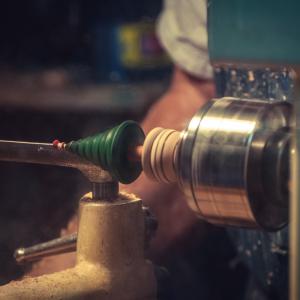 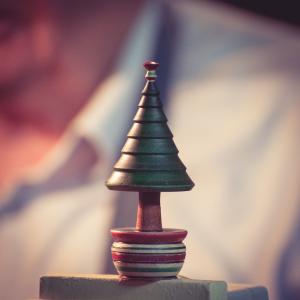 After this, we went back to the car as the rain had pretty much dissipated, and we were starting to get quite hungry. We all clambered into Dan's car, and got out our various cool-bags (optimistic I know). After a while the sun came out and it started to get pretty hot. We decided then to pack away the remains of the food, and make our way back to the estate to view the Mansion, and the gardens around it.

The house has 37 private rooms, and 7 state rooms and 1 exhibition room. In 2010, 5 years after Patrick Lichfield, the previous owner, had died they made the private rooms accessible to the public, including his drawing room, and the kitchen still left as it once was, complete with a camera on tripod set up in the study.

There was one room that particularly interested me which was about Lord Anson, who was an admiral in the Navy in charge of the Centurion. He captured a Spanish galleon and brought the spoils home to Shugborough. In one of the rooms you can see the cannons used on the ship, along with the last remaining part of the 14m figurehead of a lion, which now hangs in the hall, unfortunately I only had my telephoto lens with me, so was unable to capture this.

After visiting the top rooms we then went outside and sat on the steps in the sun and took a breather and a drink, next time I'm leaving my bag in the car!

We then visited the main gardens around the estate, which comprised of an areas such as 'The Wilderness', 'Island Arboretum' and a Chinese house, we got some of the typical "couple" shots whilst walking around here, and had a really lovely experience in the grounds area around the estate. 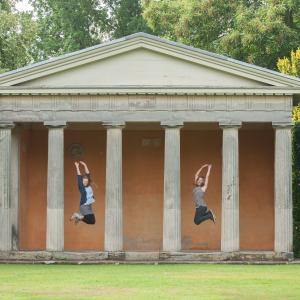 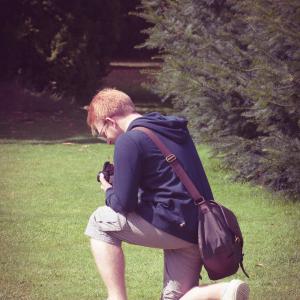 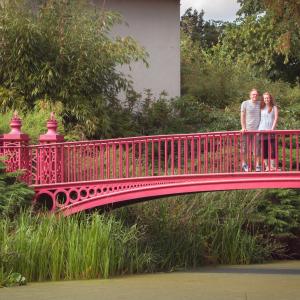 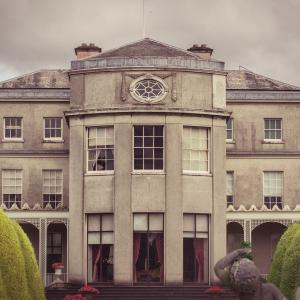 On our way back to the car, around 4pm, we spotted a door by itself in the bushes. We then recalled there are "seven secret doors" dotted around the estate, we eagerly entered and found a table set up, complete with bunting, jugs, cups and saucers, even the chairs were decorated. On the table we spotted a map which showed us the general location of the other doors, which then indicated that two other doors were on our path, so we continued to find two others. One with keys hung, saying "tie a key for someone you love" with a basket with keys attached to ribbons for you to hang from the trees. The other door actually didn't lead into anywhere, but allowed us to look down to a small stream and see a gnome. Odd yes I know. And that pretty much concluded our day out at Shugborough Estate. There were many places we just didn't get chance to visit, such as the Farm & Mill, and monuments dotted around the estate. We hope to come back on a better day, with more time, and explore these extra areas.

I would highly recommend visiting, but make sure you pack lightly, there aren't many "sitting down" areas (besides the grass) and most of the seats in the house are marked with "do not touch"! The estate has entertainment for all of the family, and is definitely a day visit job.